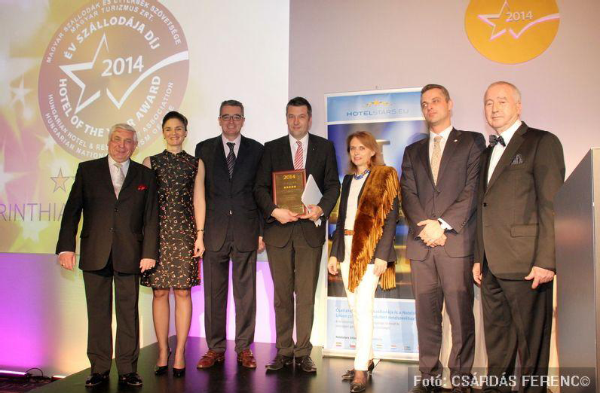 The Hungarian Hotel and Restaurant Association and the Hungarian Tourism Board have awarded Corinthia Hotel Budapest as Hungary’s Hotel of the Year 2014 in the five-star category at a ceremony held on 24 January 2015.

“According to the unanimous decision of the Jury, Corinthia Hotel Budapest became the winner on basis of the outstanding results in all the fields of the evaluation. It is a fantastic hotel with a super team,” said István Kovács, the secretary of the Hungarian Hotel and Restaurant Association

The jury of the Hotel of the Year award bases its final decisions by weighing up a multitude of factors, including the quality of the service, innovative solutions, key business performance indicators and HR practices. As the five-star winner, Corinthia Hotel Budapest performed exceptionally across these fields, and above this also demonstrated the ways in which this 120-year-old hotel builds on its great traditions and heritage, and applies innovative technologies and solutions to best serve its valued guests.

“Corinthia Hotel Budapest holds several prestigious local and international awards. It is our great honour to earn and receive this title from the two most significant organisations, which represent the community of the Hungarian hoteliers and restaurateurs.” said Thomas Fischer, General Manager of Corinthia Hotel Budapest.